The bake sale was held at 55 Grove Road in Harrogate and EM Recruiting were joined by over 25 businesses to help support the FANTASTIC charity!

There was a great turn out of guests and CAKE!

(EM Recruiting even had the support from a 5 year old girl by baking a batch of Unicorn cupcakes, which were by far everyone’s favourite!)

“Dementia is the name for a set of symptoms that includes memory loss and difficulties with thinking, problem-solving or language. Dementia develops when the brain is damaged by diseases, including Alzheimer’s disease. Alzheimer’s disease is a physical disease that affects the brain. It is named after Alois Alzheimer, the doctor who first described it.

The brain is made up of billions of nerve cells that connect to each other. In Alzheimer’s disease, connections between these cells are lost. This is because proteins build up and form abnormal structures called ‘plaques’ and ‘tangles’. Eventually nerve cells die and brain tissue is lost.

The brain also contains important chemicals that help to send signals between cells. People with Alzheimer’s have less of some of these ‘chemical messengers’ in their brain, so the signals are not passed on as well. There are some drug treatments for Alzheimer’s disease that can help boost the levels of some chemical messengers in the brain. This can help with some of the symptoms.

Alzheimer’s is a progressive disease. This means that gradually, over time, more parts of the brain are damaged. As this happens, more symptoms develop, and they also get worse.

More than 520,000 people in the UK have dementia caused by Alzheimer’s disease and this figure is set to rise.” https://www.alzheimers.org.uk/about-dementia/types-dementia/alzheimers-disease

Dementia affects the majority of the population, so help raise money today!

Feel free to contact EM Recruiting as they would love to help you support the worthwhile charity. 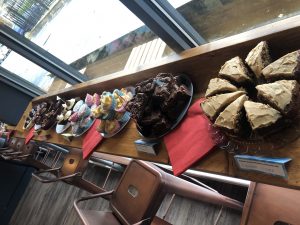